Miss Lauren: My Life at the Moulin Rouge 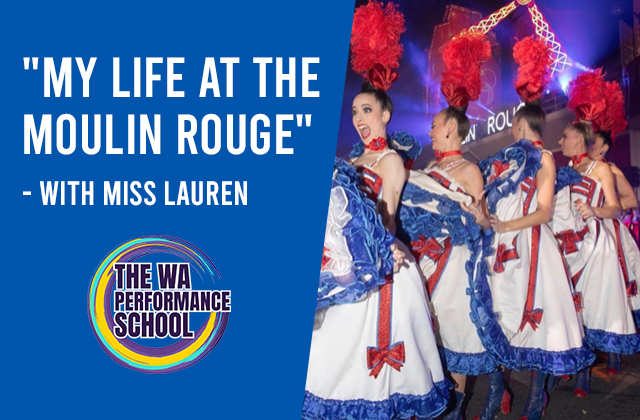 We sat down with new team member Miss Lauren to find out find out about her journey to Paris, and her life dancing at the most famous cabaret in the world.

In July 2016 the Moulin Rouge were doing an audition tour around Australia. When I heard they were coming to Perth my friends and I decided to go to the audition on our day off from full time ballet training. We were going just for fun and to try another dance style. Little did I know this audition would completely change my life.

The audition was a cattle call style audition, a hundred dancers from all over WA came to show the direction of the company their talent. Throughout each round in the audition cuts were made, which was very nerve wracking! We worked on our jazz, ballet, showgirl and cancan technique. Five hours later I was still in the audition and couldn’t believe it. The longer I stayed the more my confidence and performance showed. At the end of the audition I received a booklet with all the info on working and living in Paris. I’d been waitlisted for a contract along with the few others that were left.

I moved to London in September 2016 and I trained at Pineapple Studios every day for six months with world famous dancers and choreographers. In November the Moulin Rouge toured to London for a gala performance and I was invited to watch rehearsals. It was that special day I was told I would be receiving a contract and starting work April 2017.

Moving to Paris was one of the most exciting times in my life but it was completely different to everything I knew. Paris after all was very different to Perth and even though I lived in London, the language barrier was trés difficile! I felt relieved when I met the other eight girls I had been hired with and majority were also from Australia. It was nice to be starting with other girls who knew exactly how I felt. For myself and a few others it was our first professional contract. 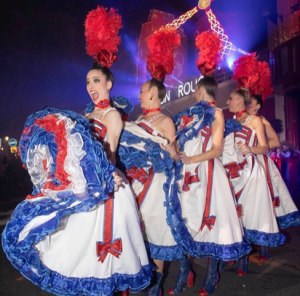 We started rehearsals on the 13th of April 2017 for the current show “Féerie”, and trained six days a week for three weeks. The rehearsals were intense and I think I was sore every day! Learning to be a showgirl was very different to my every day ballet routine. The cancan was difficult and hard on the body and getting into the swing of the cardio side of it was challenging, but we also had fun and made good friends. After a lot of dress rehearsals and getting used to very heavy headpieces and backpacks on the 3rd of May we had our opening night.

Opening night was completely surreal. All I wanted since I was a tiny dancer was to perform professionally on a big stage somewhere in Europe. When that curtain opened, there I was – on stage in Paris at the most famous cabaret in the world. I still pinch myself almost three years later from starting rehearsals that it happened. The cancan music pulsed through my body that opening night and it was one of the most magical feelings knowing I was taking part in its history. The Moulin opened in 1889 and just celebrated its 130th anniversary and now I have been a part of that.

Over time my body got used to the routine and dancing the show 12 times a week became the new normal. I would wake up between 1-2pm every day in my beautiful Montmartre apartment and have breakfast, meet up with friends for lunch dates or just chill out and watch Netflix before walking to work. I’d arrive between 7:30pm and 8pm to start makeup. I loved sitting in my change room doing my makeup and having a laugh with the other dancers. It was a good way to relax before going on stage. The first show started at 9pm and when it was done we would wait for the audience to leave, and the second audience to come in for a second show at around 11pm. Once the shows were done I usually had a lot of adrenaline pumping through me so my friends and I would embrace the Parisian nightlife! Paris je t’aime! Bed time was usually between 4am-6am. I was completely nocturnal. Whenever I had a few days off work or a holiday I would go to another city or country. I visited places I could have only dreamed of. I truly was the luckiest girl in the world.

Something that still amazes me were the people that would come and watch the show. People from all over the world. Many tourists and people on holidays, fans of the show, old dancers and sometimes even celebrities. I’ll never forget the day we were told Céline Dion was in the audience. Meeting her was unreal. What was really rewarding about experiencing famous people watching the show was hearing their feedback and admiration for us, the dancers. It really put everything into perspective and would remind me of how hard I worked to be there. However, my favourite people to watch the show were definitely my friends and family. These are moments I will treasure forever. 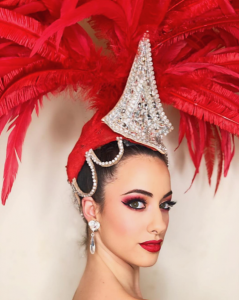 I look back now from Perth on the last three years of my life overseas and I can’t believe it happened. I still pinch myself every day. I am grateful for everything that happened, the memories made and my time on the Moulin Rouge stage. It also gave me the opportunity to step into the deep end of adulthood and I learnt so much. Paris will always be another home to me and the Moulin Rouge will hold a special place in my heart forever.

For any tall dancer who is considering auditioning GO FOR IT! Go in with the same attitude I had, I thought of it as an extra class and most of all I had fun. This attitude should apply to any audition you undertake. At the end of the day if you love dancing, people want to feel that love and passion through your movement and performance. Dancing should always be fun and I definitely had fun on stage at the Moulin Rouge. It was the experience of a life time.