Stella is Optus’ Australian Businesswoman of the Year! 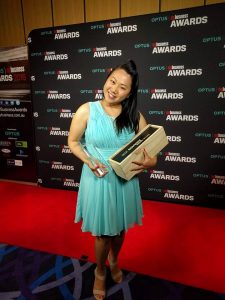 We are extremely proud to announce that our hard-working director Stella Hui has been awarded the title Optus MyBusiness Australian Businesswoman of the Year for 2016!

We’re particularly thrilled to have an arts and entertainment-based entrepreneur recognised at such a prestigious national level. We would like to thank not only Stella for her unending passion and dedication to making WAPS the best it can be, but also to every teacher, entertainment client, student, parent, or ticketholder for their support over the years!

In typical fashion, our directors Stella and Cameron left Sydney almost immediately after the awards ceremony in order to get back to Perth in time for Saturday classes at WAPS – feel free to pass on your congratulations next time you see Stella around the studio! Scroll down for an interview with Stella from MyBusiness.com.au

To mark International Women’s Day, Businesswoman of the Year at the Optus My Business Awards and director of three companies, Stella Hui, shares her secrets to success in business, and in life.

As the director of Azure Entertainment, Lady Velvet Cabaret and the WA Performance School, Stella is no stranger to the world of business. Yet what makes her story so incredible is that she started her first business when she was just 15.
Stella moved briefly into the corporate world, working in business banking. However, she returned to working for herself when her passion for performing identified a gap in the market.

“Around eight or nine years ago, when I was still working in the corporate field, I just started to notice that in the entertainment industry, especially in WA back then, it was quite segmented,” Stella recalls.
“For example, we had dance competitions that only showcase dancers. We had open mic nights for comedians, and that’s all you got to see for that night.

“There was no variety show that brought all of that talent together. So, I just thought, ‘For fun, I’ll put a show on myself that brought everyone together,’ and it ended up being a massive hit.”

Stella’s variety show brought all different kinds of performers together, including singers, dancers, actors, mime artists, acrobats and comedians from all over Australia. “That was when I started to think, ‘Wow! I’ve got something here that’s actually a really good idea, and then we started to do more shows.”

This is what kicked off Azure Entertainment, which specialises in live entertainment for events and functions, as well as performance troupe Lady Velvet Cabaret.

Having built successful businesses attracting sizeable crowds, Stella found herself repeatedly being asked by customers where they could learn how to perform, and how to enter the industry. At the time, Stella did not have an answer.

“Not long after we started Azure Entertainment and Lady Velvet Cabaret, the opportunity came up for me to purchase my own dance school,” Stella says.

“So at that point, I had to decide whether to basically put a lot of money into purchasing this business and risk everything, or just let it go and wait until I was ready. I think the best business decision I made was, at that point, to just decide to go for it, trust my gut, trust my instinct, and have confidence in myself.”

By taking that risk, Stella was then able to centralise her service offerings and strengthen all three businesses.

“I’m able to have a studio space that I can provide classes, have a meeting point [for] my performers to rehearse… basically have a home for my business,” Stella explains.

When you hit an untapped demand, customers will generally be clamouring for your products and services. For Stella and Azure Entertainment, Lady Velvet Cabaret and the WA Performance School, her businesses hit the market so strongly that she struggles to keep up with the demand.

“We are in such a niche market, and we are in Perth as well, which is a big place for a small town. [But] when it comes to entertainment, I think a lot of our audiences are quite hungry for it, so when we put on shows, when we have classes, it’s generally people are begging for it,” she says.

Another challenge for Stella comes down to determining which performances to take on, and managing the competing egos and creative differences of employees.

“Art, whether it’s performance or visual, it’s a very personal thing for a lot of people. Often, I might [not] see eye-to-eye with someone else when it comes to creative vision, or as the director, I might have to see things from more a business perspective, and some people might not understand where I’m coming from.

“The biggest challenge has been to find that sweet spot between myself and my employees, to make sure there is that mutual respect there [and] ensure that our communication methods are tailored for different personalities because some people hear things and understand things better when information is presented in a certain way.”

Despite having an award-winning business, Stella has not always been standing as confidently as she does as a businesswoman today.

“As an Asian child growing up in Australia, confidence hasn’t actually been my strong point,” Stella shares.

In order to build up that confidence, Stella learned to let go of the smaller things experienced in business that other people may fervently latch onto.

“That’s helped me quite a lot, especially in the last few years as well, to just have that mindfulness and mindset and not worry about the small things – just thinking from a higher level, rather than still being in the business and just worrying about all these little problems that really amount to nothing in the end,” she says.